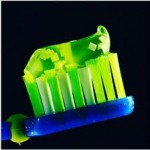 What if your toothpaste could tell you whether you needed to leave the house carrying an umbrella? Or how hot the day was going to be?  Odd as it may sound, David Carr of MIT's Media Lab is working on just such a prototype product, "Tastes Like Rain."

Carr and his colleagues are focused on super-mechanicals, or the idea of taking a basic object and giving it dynamic properties (consider, for example, the Proverbial Wallets, also out of MIT Media Lab, that know your financial state and prevent over spending).

In this case, toothpaste is modified to dispense one of three flavors depending on the weather. If it's mint, you know it's colder out than yesterday. Cinnamon means it's hotter. Blue stripes indicate precipitation.

The prototype is currently hooked up to a small Linux computer that pulls forecasts, using custom software to compare previous and current temperatures and divvy up the flavors.

Then, linear actuators squeeze out the proper variety of toothpaste through a heavily modded Mentadent dispenser.

Eventually, the technology could be pared down so "Tastes Like Rain" shows up on store shelves alongside the Colgate and Crest. Minus the computer, Carr hints it could be powered on a low-cell battery.

The prototype is in the early stages and Carr is still working out technical specifications. Perhaps selling a base unit that plugs into the wall and serves as a both a communications hub and mixing valve would be a viable option with refill tubes available.

Of course, we're not sure how much reach Carr's device would have given today's easy access to weather apps on phones and computers. But the idea itself is remarkably creative and hints that we're likely to see many more super-mechanical innovations in the future. Cloudy with a chance of potentially awesome.

If you enjoyed this article, there is a good chance you will like these articles from my blog as well: