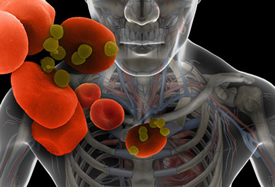 Inflamed gums – popularly known as gum disease  – usually affects people over the age of 40.  Caused by poor oral hygiene or improper brushing technique itself is a bacterial plaque that eventually attacks the gums. The onset of infection often remains undetected because it causes no pain. The trouble usually begins with bleeding gums, swelling of the gums and bad breath. In extreme cases, it will form gum pockets and bone loss is reduced.

Inflammation spreads throughout the body

But the inflammation is not restricted to the oral cavity.  From the gingival pockets, bacteria and pro-inflammatory mediators travel into the bloodstream.   Inflammation occurs in the blood vessels or even in previously damaged heart valves. The result: the risk for atherosclerosis, heart attack and stroke increases. Studies show, for example, that the likelihood of cardiovascular disease in people with periodontal disease is increased by 70 percent.

Bacteria attack the heart and lungs

The connection between bad teeth and the lungs was showed recently by researchers from the U.S.. They found that people with bronchitis or COPD often have bad teeth.  Lung disease is caused when bacteria from the upper throat are inhaled and reach the lower respiratory tract. Various factors such as smoking or a weakened immune system increase the risk of developing lung disease. However, further research is needed to clarify the precise relationship, the researchers said.

Diabetics often have inflamed gums
Particularly well studied is the relationship between diabetes and gum disease. Those with poorly controlled blood sugar levels can result in bad wounds. The excess sugar in the blood promotes inflammation and inhibits healing. Diabetics can suffer up to 3.5-fold increased risk of developing periodontal disease. Conversely, the inflamed gums increase the insulin resistance.

To prevent gum disease proper oral hygiene is essential.  Teeth brushing should occur at least twice a day.   The spaces between the teeth should also be cleaned daily with floss or special interdental brushes.   At least twice a year a prophylaxis should be performed by a dentist.   Here, the deposits and tartar are removed, and the teeth are treated with fluoride and given a thorough guide to dental care.

Source:  News Around The World